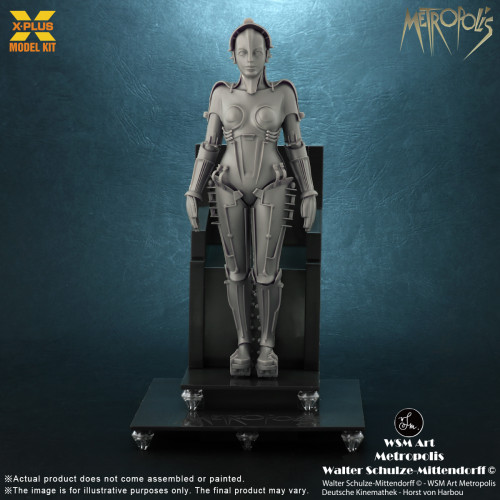 "X PLUS's Maschinenmensch Plastic Model Kit: Mediating its way from your hands to your heart!

The “Maschinenmensch”, the fictional robot from Fritz Lang’s silent film Metropolis, was originally played by German actress Brigitte Helm, both as the titular robot “gynoid” and its human form. In the movie, the robot was created by the scientist Rotwang as an approximation of his former lover, Hel.

Maschinenmensch was one of the first, and perhaps most iconic fictional robots ever depicted in cinema, and went on to be one of the primary influences of robotic design in both feature film, television and technology.

The ⅛ scale model features Maria in her/its most iconic pose, as it stands with an air of awe and deepest fascination for Rotwang’s greatest creation. This time with the parts molded in beige silver color reminiscent of the silver screen era.

As an added detail, avid fans of the classic silent film will appreciate the flavor text found at the back of the throne as well as "HEL" embossed in the iconic Metropolis typeface; a reminder of the original form of Rotwang's obsession.

NOTE: Every set comes with one display stand!

**PRODUCT DETAILS COULD BE SUBJECTED TO CHANGE WITHOUT FURTHER NOTICE